Flowered Up emerged at the height of ‘Madchester’ and the legendary acid house movement in 1990, and were frequently pigeon-holed as north London’s answer to the Happy Mondays.

In a scene dominated by northern bands such as the Mondays, The Stone Roses, Inspiral Carpets and The Charlatans, it wasn’t the height of cool to hail from London’s King’s Cross.

Nevertheless, the band were sufficiently hyped by the British music press that they made the cover of the NME and Melody Maker before they’d even released a record.

London Records were the label that bit, with a £250,000 6-album deal, which singer Liam Maher would later feel was the band’s downfall, with the intense pressure it put on sales.

The label were naturally keen to market their act heavily, but Maher was unhappy with their debut album, and didn’t feel the production adequately reflected what the band were about.

With expectations sky-high, and a slightly cynical, baggy bandwagon sound, the album was met with skepticism, and the seeds of the Flowered Up backlash were sown.

The band’s response was to work with a different production team to record this 13-minute epic in 1992, which saw the band’s credibility significantly restored, winning praise from fans and critics alike.

‘Weekender’ sees the band divert focus to the mundanity of the popular live-for-the-weekend lifestyle adopted by many of their working and lower-middle class north London compatriots.

This was a true crossover track, appealing to indie and dance sensibilities, and it was played out heavily by DJs in both types of club.

Despite the unavailability of a 7” single, and a radio edit, ‘Weekender’ became the band’s biggest hit, reach number 20 in the UK charts despite these obstacles.

In keeping with this refusal to conform, rather than a regular video, an 18-minute short film was released to accompany the track, which bears some retrospective comparison with Shane Meadows’ style, and with Danny Boyle’s classic film Trainspotting.

But Flowered Up seemed somehow destined not to play to the script, and the achievement of their biggest hit had followed their being dropped by their label, hence the track being released on Heavenly rather than London Records.

Just months later, the south would become cool again on the indie scene, when Blur scored a hit with their ‘Modern Life Is Rubbish’ album, and Suede released their debut long player.

The band soon split, but the tragic endgame would come much later, with Maher’s death from a heroin overdose in 2009, and his brother, guitarist Joe Maher, from the same cause in 2012.

One wonders if a different set of choices between 1990 and 1992 by both band and label might have seen the brothers still alive today, and who knows, perhaps performing more classics in the mould of this epic 12” single. 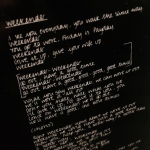